Skip to content
Recent Posts What Can We Expect from Alliant 2 SB?

What Can We Expect from Alliant 2 SB?

On August 19, the General Services Administration (GSA) announced that it will accept revised proposals for Alliant 2 Small Business (SB) – a 10-year, $15 billion, small business contract. Alliant 2 SB is only open to offerors who initially applied for the vehicle, so if you applied last time around, you must re-submit this time.

So where do we stand now with Alliant 2 SB? Here’s a look at the timeline, and a brief rundown of what we can expect. For more tips and tricks on how to make the most of your resubmission, register for our webinar at the bottom of this post!

The RFP for Alliant 2 SB was initially released over 3 years ago in June 2016. Proposals were due in October 2016, and protests/protest decisions occurred between December 2017 and March 2019.

Draft Amendment 9, which includes the revised proposal instructions, was released last month on August 19, 2019, and questions on the Amendment were due on September 3rd. At this point, we’re still waiting on a few key items to be announced, including:

Who Can Submit Proposals for Alliant 2 SB?

Alliant 2 SB is a continuation of the original solicitation, not an on-ramp. Only companies who submitted proposals for the original Alliant 2 SB can respond this time. As the draft Amendment 9 states, “This draft amendment would require responses from existing offerors; no new offers would be accepted.”

GSA has also increased the number of awards from 80 to 120 top-scoring bidders.

What’s Changed in the Proposal Instructions for Alliant 2 SB?

There are a number of significant factors that have changed in the revised proposal instructions for Alliant 2 SB. Teaming-related updates and new requirements for contract experience citations are two major changes. In terms of the submission of Volumes, bidders are required to submit new Volumes 4: Systems, Certifications, and Clearances and Volume 6: Cost-Price, along with a complete resubmission of any other volume for which anything has changed since the original submission (Volumes 1, 2, 3, and 5). The Alliant 2 SB procurement office eliminated proposal Volume 7: Responsibility, but state that after proposal submission the Government may request GSA Form 527, Contractor Qualification and Financial Information as part of the Government’s responsibility determination.

For more details on what has changed in the proposal instructions, and for tips on how to maximize your win strategy, tune into Red Team’s webinar on Alliant 2 SB on September 11 at 1pm.

Want to learn about Alliant 2 SB? Listen to our webinar. 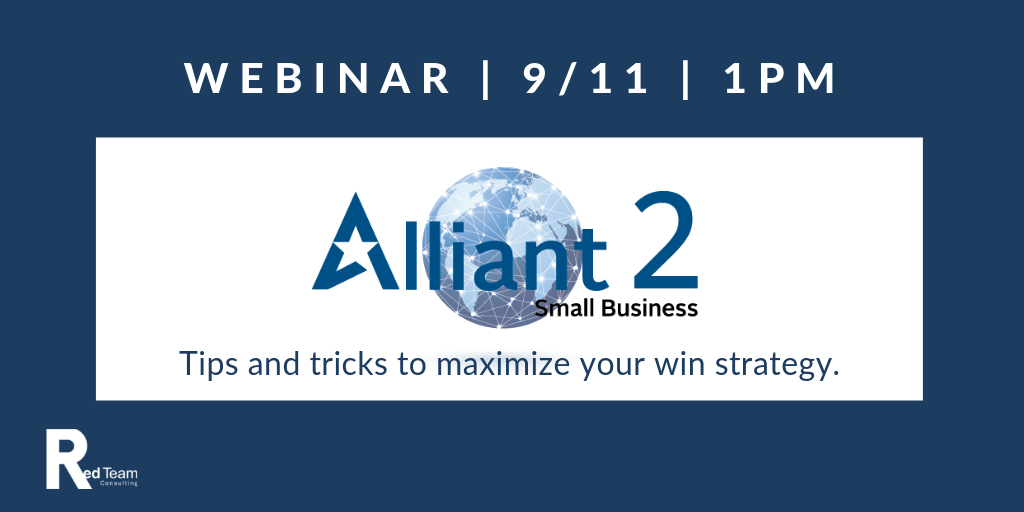